Strokes of Genius: Federer, Nadal, and the Greatest Match Ever Played (Paperback) 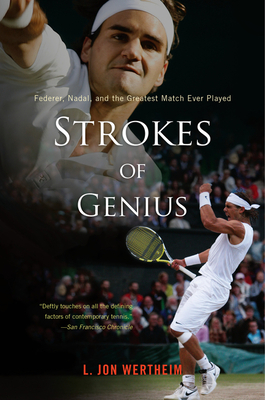 In the 2008 Wimbledon men’s final, Centre Court was a stage set worthy of Shakespearean drama. Five-time champion Roger Federer was on track to take his rightful place as the most dominant player in the history of the game. He just needed to cling to his trajectory. So in the last few moments of daylight, Centre Court witnessed a coronation. Only it wasn’t a crowning for the Swiss heir apparent but for a swashbuckling Spaniard. Twenty-two-year-old Rafael Nadal prevailed, in five sets, in what was, according to the author, "essentially a four-hour, forty-eight-minute infomercial for everything that is right about tennis—a festival of skill, accuracy, grace, strength, speed, endurance, determination, and sportsmanship." It was also the encapsulation of a fascinating rivalry, hard fought and of historic proportions.

In the tradition of John McPhee’s classic Levels of the Game, Strokes of Genius deconstructs this defining moment in sport, using that match as the backbone of a provocative, thoughtful, and entertaining look at the science, art, psychology, technology, strategy, and personality that go into a single tennis match.With vivid, intimate detail, Wertheim re-creates this epic battle in a book that is both a study of the mechanics and art of the game and the portrait of a rivalry as dramatic as that of Ali–Frazier, Palmer–Nicklaus, and McEnroe–Borg.

L. JON WERTHEIM is an executive editor at Sports Illustrated and the author of several books, including Blood in the Cage, a chronicle of the rise of mixed martial arts, and Running the Table, about a bipolar pool hustler named Kid Delicious. His work has been featured in The Best American Sports Writing numerous times.

“Imagine a world heavyweight championship fight in a cathedral. Jon Wertheim brings one back to nail-biting-life in Strokes of Genius. His stirring blow-by-blow (and behind the scenes) account of the 2008 collision of Roger Federer and Rafa Nadal in the tennis temple—Wimbledon's Centre Court—illuminates a kingdom changing hands. An engrossing book, Nadal over Federer overseen by Wertheim make an unforgettable trio.”
—Bud Collins

“... A volume that should appeal to those who care little about tennis. Why? Because it manages to be -- simultaneously -- about achieving greatness at an endeavor, about handling the fame wrought by greatness, about the psychology of friendship and sportsmanship, about the role of sports in societies and about the positives and negatives of intense competition.” —Cleveland Plain-Dealer

“Wertheim has not only given that glorious moment in tennis history the precise kind of literary treatment it merits, but he has done more than that. Writing with clarity and superb interpretive insight, conveying a depth of appreciation for both players that few of his peers could equal, building drama across chapter after chapter, Wertheim does a masterful job of allowing all of us to revisit an incomparable occasion . . . Compelling and penetrating . . . An honorable piece of work, one that will appeal across the board to fans, and one that will enhance the landscape of tennis literature.”
—TennisChannel.com

“Compelling . . . Hardcore tennis fans will revel in Wertheim’s expertise and his proximity to the players and their event; others can’t help but be attracted to a vision of two champions and a rivalry in their prime." — Booklist, starred review

“Comprehensive and thoroughly engaging . . . Wertheim’s informative backstories behind the clash itself and the contrasting personalities...should convince readers that this drama-filled and high-quality duel of tennis titans gives the historic 1980 Borg-McEnroe final a well-earned run for its money. Recommended.” — Library Journal

“Gripping . . . Wertheim’s involving tone is well suited to the sweep of his project, which successfully reawakens the excitement of one of the greatest encounters in sports history.” — am NewYork