When the Colonial moved to Bradley Meadows, 29 Tinker languished for several years – used occasionally as a headquarters for the local Republican Party – until Shapiro, who’d been waitressing at the Threepenny Restaurant nearby, approached Forno about renting the space. Samuels, who’d first met Shapiro at Rutgers in the 1960s, was visiting his brother in Woodstock at the time, and quickly got on board. Together they took out a Small Business Administration Loan, and with the help of legendary publisher Betty Ballantine renovated and stocked the store. 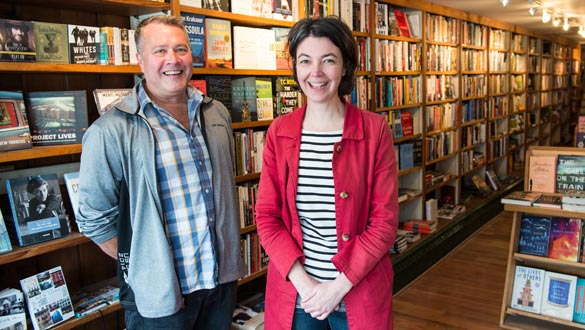 In those pre-digital days, all inventory was kept on file cards. The owners prided themselves on creating the kind of environment where customers were greeted by name and could talk books for hours with staff members familiar with their tastes. Over the years, this was the kind of hands-on service that the Golden Notebook grew famous for and ultimately what led to its being nominated for the Publishers Weekly Bookseller of the Year Award in 2003.

Most would agree that the Golden Notebook thrived, like many of the best independent bookstores in the country, because of its deep connection to its community. A book can be bought anywhere, but the kind of community of writers, artists, musicians, and iconoclasts that has always existed in Woodstock cannot. At the height of its powers, the store had its own Golden Notebook Press, The Golden Notebook Children’s Store, and a gift store called The Golden Bough next door.

On September 6, 2010, after 32 years of loyal service at the heart of Woodstock’s cultural and commercial scene, Ellen and Barry closed their doors. Though the store had found its niche early on, the publishing world was now a very different place from the one that existed in 1978. Online sales of physical books at or below cost, as well as the rapid growth of e-books, had begun to erode the revenues and futures of most brick-and-mortar bookstores. The independents had seen their ranks thinned by about two-thirds since 2001. Even the big chains were tottering.

At first, the pair had some difficulty finding a buyer, and the town worried over the loss of its only new and general-interest bookstore. But at the eleventh hour, Jacqueline Kellachan stepped up and entered negotiations with Shapiro and Samuels. Just before their intended Labor Day closing, Barry and Ellen put a sign in the window announcing that the store would live on under new ownership. 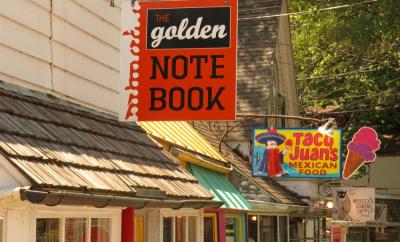 Kellachan, formerly an epidemiologist for New York City and then the New York State Department of Health, devoted herself to the store full-time. The new owner redid the floors, painted the walls, moved the children’s section, and renovated upstairs so that it could be used as a venue for readings and events, finally reopening on October 29, 2010. Kellachan set out to improve the stores online presence, while continuing to cater to local tastes for literary fiction, contemporary music biographies, poetry, children’s titles, art, and books on local history.

In 2011, the year that brought with it the demise of Borders and the closing of more than a few Barnes and Nobles stores, the Golden Notebook offered over 90 author events to the community. As part of its ongoing association with Martha Frankel and the Woodstock Book Fest, the store has been lucky enough to host and sponsor events featuring Pulitzer Prize winners William Kennedy and Paul Muldoon, Man Booker Prize winner Lydia Davis, living legend Philippe Petit, and luminaries such as Neil Gaiman, Steve Earle, Colm Toibin, Cheryl Strayed, Andre Dubus III, Augusten Burroughs, and Zephyr Teachout. 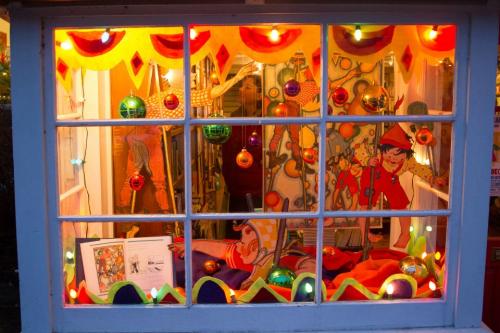 More recently the bookstore has started partnering with public and independent schools in the area for book fairs. Proceeds from these book fairs go to supporting the schools as well as non-profit groups in Ulster County and the surrounding Hudson Valley. Over the past year the Golden Notebook has contributed cash or in kind donations to schools in the Onteora and Kingston School Districts as well as to non-profits such as the Phoenicia Rotary, Ulster Literacy, Inc. and Family. The store's current philosophy is to be in the community as much as possible. Woodstock has been referred to as “the biggest small town in America.” Kellachan says, “We want the Golden Notebook to be the biggest small bookstore in America.”

In 2015, James Conrad, former co-owner of Woodstock Wool Company in Woodstock, purchased the building at 29 Tinker Street, along with 50 percent of the business. Originally from Minnesota, Conrad received his BA from Northwestern University and spent another year in Chicago managing Platypus Bookstore on Dempster Street in Evanston. He then moved to New York City where he received a MFA in the Writing Program at Columbia University. He then pursued a career as an art director for publications such as Out Magazine, Esquire, City Limits, American Time, and Radar Magazine. His poetry, short stories and reviews have appeared in Tin House, Helicon, The Allegheny Review, Inside Chicago, Out Magazine, Publisher's Weekly and Chronogram. His first novel, Making Love to the Minor Poets of Chicago, was published by St. Martins Press in 2001.

In 2018, the Golden Notebook continues on in the original spirit of its founders, providing quality literature to a town full of creative folk. Stop by the store! Our experienced staff will share their hands-on knowledge and help you find the books you want and the books you need. We are here for you online as well. We have lots of books to recommend and we will ship anywhere. eBooks too. In the meantime check out our events, plan your next visit to Woodstock and come visit a real, live bookstore!