TREYF: My Life as an Unorthodox Outlaw (Hardcover) 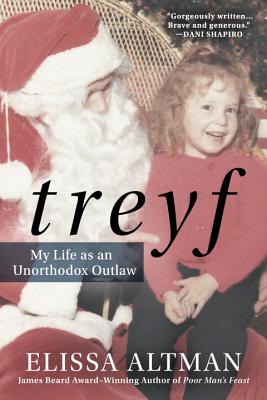 From the Washington Post columnist and James Beard Award-winning author of Poor Man’s Feast comes a story of seeking truth, acceptance, and self in a world of contradiction...

Fans of Augusten Burroughs and Jo Ann Beard will enjoy this kaleidoscopic, universal memoir in which Elissa Altman explores the tradition, religion, family expectations, and the forbidden that were the fixed points in her Queens, New York, childhood. Every part of Altman’s youth was laced with contradiction and hope, betrayal and the yearning for acceptance: synagogue on Saturday and Chinese pork ribs on Sunday; bat mitzvahs followed by shrimp-in-lobster-sauce luncheons; her old-country grandparents, whose kindness and love were tied to unspoken rage, and her bell-bottomed neighbors, whose adoring affection hid dark secrets.

While the suburban promise of The Brady Bunch blared on television, Altman searched for peace and meaning in a world teeming with faith, violence, sex, and paradox. Spanning from 1940s wartime Brooklyn to 1970s Queens to present-day rural New England, Treyf captures the collision of youthful cravings and grown-up identities. It is a vivid tale of what it means to come to yourself both in spite and in honor to your past.

Elissa Altman is the author of the critically acclaimed memoir Poor Man's Feast and the James Beard Award–winning blog of the same name. She writes the Washington Post column, “Feeding My Mother,” and her work has appeared everywhere from OnBeing.org and O, The Oprah Magazine to Tin House, the New York Times and the TEDx stage, and has been anthologized for five consecutive years in Best Food Writing.

“What makes Treyf so original is the author’s wry humor and her gimlet eye. She is expert at evoking time, place and social status. . . . her prose shines. . .”—Wall Street Journal

“A brave and generous memoir, a lucid love letter to her own family’s history that . . . does the work of a great memoir in piercing the reader’s separateness and reminding us that we are not alone. I love this book.”—Dani Shapiro, National Bestselling Author of Devotion

“[A] beautiful, brilliant memoir... wrought with such visceral love that the pages shimmer.”—Kate Christensen, Author of Blue Plate Special

“[A] memoir that reads like a novel... Gorgeous, singular, heartbreaking, haunting.”—Joanna Rakoff, Author of My Salinger Year

“[H]ard to put down.... Altman’s conflicted feelings about her life, her parents, and, yes, food infuse this delicious memoir.”—Booklist

“Altman’s path to living authentically is hard won, but she demonstrates there’s reward to be found in the fight.”—Publishers Weekly

“Altman has produced a family memoir that is pungent, raw, sometimes hilarious, but never delicate. . . .If you’re a Jew, it’s impossible to read this book and not burn from the repeated shocks of recognition. But it’s equally impossible if you’re a woman who was once a daughter, if you’re anyone who’s ever been an adolescent at almost any time in the past few centuries. . . . With skill, pathos and subversive wit, Altman depicts her parents’ and her own conflict between individuation and belonging, between being American and being imprinted with a tribal affiliation far less shiny and new.”—ARTery

“It’s not easy being a Jewish girl who hates borscht and loves Spam. . . . Although Treyf tells a very specific Jewish family story, its portrait of the pull between tradition and assimilation can apply to any of the ethnic groups that came to this country in the mass migration of a century ago.”—Connecticut Post

“That Altman is a consummate storyteller is no surprise — it’s in her blood and in her bones. . . . Humor and the ability to find humor, at least in hindsight, during the most trying of times also carries Altman’s storytelling. This is an intensely funny book despite the very honest treatment of challenging situations.”—Forward

“. . . captures what it means to become yourself while also honoring your past.”—Refinery29

“A smart yet tender tale of her gastronomical and spiritual evolution...Sometimes heartbreaking, often hilarious, this is one of the finest food memoirs of recent years.”—The New York Times Book Review

“Delightful...Poor Man’s Feast deserves a place on the shelf with the finest food writers.”—New York Journal of Books

“A brave, generous story about family, food, and finding the way home.”—Molly Wizenberg, author of A Homemade Life