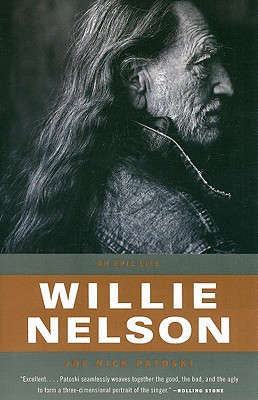 From his first performance at age four, Willie Nelson was driven to make music and live life on his own terms. But though he is a songwriter of exceptional depth - "Crazy" was one of his early classics - Willie only found success after abandoning Nashville and moving to Austin, Texas.

Red Headed Stranger made country cool to a new generation of fans. Wanted: The Outlaws became the first country album to sell a million copies. And "On the Road Again" became the anthem for Americans on the move. A craggy-faced, pot-smoking philosopher, Willie Nelson is one of America's great iconoclasts and idols.

Now Joe Nick Patoski draws on over 100 interviews with Willie and his family, band, and friends to tell Nelson's story, from humble Depression-era roots, to his musical education in Texas honky-tonks and his flirtations with whiskey, women, and weed; from his triumph with #1 hit "Always On My Mind" to his nearly career-ending battles with debt and the IRS; and his ultimate redemption and ascension to American hero

Joe Nick Patoski is the author of the award-winning Willie Nelson: An Epic Life as well as biographies of Stevie Ray Vaughan and Selena. He has written for Texas Monthly, Rolling Stone, No Depression, Country Music, TV Guide, and the Austin American-Statesman. He lives in the Texas Hill Country.