Heat and Light: A Novel (Paperback) 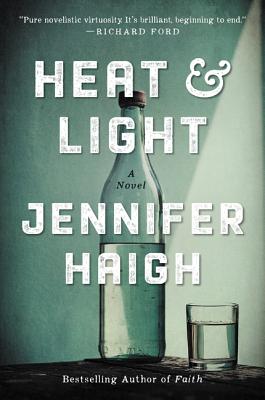 “Haigh has been building a body of work around Bakerton, Pennsylvania, for more than a decade. In this new novel, Haigh once again unleashes the sweep of historical forces as out-of-state companies look to drill for natural gas deposits. There is hope among residents that the future will be brighter, but there is also risk that they will just end up victims of greed and further environmental ruin. This is a big, issue oriented book, but its success is found in the brilliance with which Haigh crafts her characters and makes their lives a vehicle for looking at the moral, political, environmental, and economic questions about fracking. A timely book and perhaps one even worthy of the title 'Great American Novel'.”
— Anmiryam Budner, Main Point Books, Bryn Mawr, PA

Acclaimed New York Times bestselling author Jennifer Haigh returns to the Pennsylvania town at the center of her iconic novel Baker Towers in this ambitious, achingly human story of modern America and the conflicting forces at its heart—a bold, moving drama of hope and desperation, greed and power, big business and small-town families.

Forty years ago, Bakerton coal fueled the country. Then the mines closed, and the town wore away like a bar of soap. Now Bakerton has been granted a surprise third act: it sits squarely atop the Marcellus Shale, a massive deposit of natural gas.

To drill or not to drill? Prison guard Rich Devlin leases his mineral rights to finance his dream of farming. He doesn’t count on the truck traffic and nonstop noise, his brother’s skepticism or the paranoia of his wife, Shelby, who insists the water smells strange and is poisoning their frail daughter. Meanwhile his neighbors, organic dairy farmers Mack and Rena, hold out against the drilling—until a passionate environmental activist disrupts their lives.

Told through a cast of characters whose lives are increasingly bound by the opposing interests that underpin the national debate, Heat and Light depicts a community blessed and cursed by its natural resources. Soaring and ambitious, it zooms from drill rig to shareholders’ meeting to the Three Mile Island nuclear reactor to the ruined landscape of the “strippins,” haunting reminders of Pennsylvania’s past energy booms. This is a dispatch from a forgotten America—a work of searing moral clarity from one of the finest writers of her generation, a courageous and necessary book.

JENNIFER HAIGH is the author of the short-story collection News from Heaven and six bestselling and critically acclaimed novels, including Mrs. Kimble, Faith and Heat and Light, which was named a Best Book of 2016 by the New York Times, The Washington Post, the Wall Street Journal and NPR. Her books have won the PEN/Hemingway Award, the Massachusetts Book Award and the PEN New England Award in Fiction, and have been translated widely. She lives in New England.

“Ms. Haigh is an expertly nuanced storyteller long overdue for major attention. Her work is gripping, real and totally immersive, akin to that of writers as different as Richard Price, Richard Ford and Richard Russo...With this book, she moves one big step closer to being in their league.” — Janet Maslin, New York Times

“We finally have a novel - and a novelist - whose ambitions match the scale of this subject…a tour-de-force of multiple point-of-view narration…DeLillo-esque…Haigh’s achievement in this expansive, gripping novel is to delineate the ways in which we are all connected, for better and worse. — The Washington Post

The novel is not an environmental treatise masked as fiction; rather, it’s a perfectly paced rendering of the intertwined characters’ personal stories. Haigh smoothly switches between past and present, fully exposing that, indeed, the past is not even past. This is a must-read... — Booklist (starred review)

“Each page glimmers…Sweeping yet intimate, Heat and Light is an exemplar of fiction’s capacity to awaken us to truth.” — O, the Oprah Magazine

“Paragraph by paragraph, the prose is full of marvelous texture and material sensation. Heat and Light is an intricate and ambitious novel, firmly grounded in history and our time. The narrator’s encyclopedic knowledge and keen insights about the physical world and social life make the novel a thrilling page turner.” — Ha Jin, National Book Award-winning author of WAITING

“...a stunning book, a grand book, a book of old-fashioned power and scale...it takes aim at power and greed, plunder and the profit motive, the rapacity inherent in the American Dream and the complicity of its victims..This is an unsparing book, and one that sings.” — Joshua Ferris, author of THEN WE CAME TO THE END

“Heat and Light is a riveting panoramic tale keying... In the spirit of Don DeLillo’s Underworld and the novels of Dana Spiotta and Rachel Kushner...a greyhound of a novel; smart, sharp, hyper precise, and near incantatory in its momentum.” — Richard Price