Earl Warren: A Life of Truth and Justice (Hardcover) 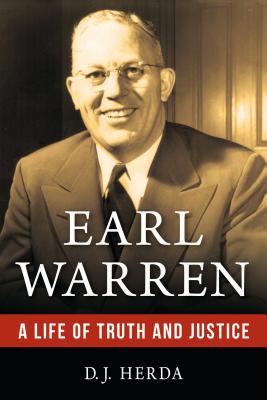 The definitive biography of one of history's greatest Supreme Court justices.

How did a conservative Republican end up creating the most liberal Supreme Court in modern history? This new biography of Earl Warren Sr., based on primary sources and previously unpublished material, brings together for the first time family recollections, anecdotes, mementoes, photos, documents, and excerpts from diaries, along with the facts of the great jurist's life. The result is the most accurate, up-to-date, and complete picture of the man available.

Beginning with Warren's upbringing and Scandinavian immigrant parents who taught him fairness, tolerance, and reverence for the truth, the author then reviews Warren's early career in California as a district attorney. There he helped put an end to corruption in the police department, tackled organized crime, and worked to end illegal gambling and offshore racketeering. After becoming governor, he fought to improve the state's public health, education, and prison systems. And he played an important role in the election of Dwight D. Eisenhower as the first Republican president in twenty years.

Focusing largely on Warren's remarkable career as Chief Justice of the Supreme Court, chapters are devoted to that court's landmark rulings, including Brown v. Board of Education and Miranda. In addition, the author discusses Warren's relationships with Richard Nixon and John F. Kennedy. Finally, he delves into the Chief Justice's role in spearheading the Warren Report, the official publication documenting the investigation of President Kennedy's assassination--findings that forever etched Warren's name in history.

With access to surviving Warren family members, courtesy of Earl Warren's grandson, Judge James Warren, the author has crafted the definitive biography of one of history's greatest Supreme Court justices.

D. J. Herda is an accomplished author, award-winning creative writer, syndicated columnist, photojournalist, videographer, editor, painter, sculptor, public speaker, and college-level instructor. As a writer, he is prolific and creative, having published more than ninety books and several hundred thousand short pieces. His subject matter ranges from famous US Supreme Court justices, computers and technology, space exploration, American history, and the environment to science, the arts, gardening, construction, writing, sports, landmark Supreme Court decisions, and more. Several of his books have been best sellers, and he is the recipient of several national awards of merit. Herda has also had extensive experience as an editor, editing books, magazines, newspapers, and online media both in Chicago and nationally for more than forty years. For many years, he was a syndicated columnist for the Washington Post, the Chicago Tribune, the Los Angeles Times, and more than 1,100 other US and Canadian newspapers.