Down and Derby: The Insider's Guide to Roller Derby (Paperback) 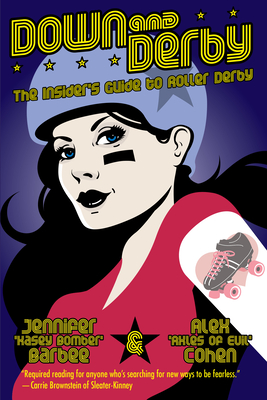 By Alex Cohen, Jennifer Barbee
Email or call for price.
Hard to Find

"Part manifesto, part how-to-guide . . . required reading for anyone who's searching for new ways to be fearless." --Carrie Brownstein

When most Americans hear the words "roller derby" today, they think of the kitschy sport once popular on weekend television during the seventies and eighties. Originally an endurance competition where skaters traveled the equivalent of a trip between Los Angeles and New York, roller derby gradually evolved into a violent contact sport often involving fake fighting, and a kitschy weekend-television staple during the seventies and eighties. But in recent decades it's come back strong, with more than 17,000 skaters in more than four hundred leagues around the world, and countless die-hard fans. Down and Derby will tell you everything you ever wanted to know about the sport. Written by veteran skaters as both a history and a how-to, it's a brassy celebration of every aspect of the sport, from its origins in the late 1800s, to the rules of a modern bout, to the science of picking an alias, to the many ways you can get involved off skates.

Informative, entertaining, and executed with the same tough, sassy, DIY attitude--leavened with plenty of humor--that the sport is known for, Down and Derby is a great read for both skaters and spectators.