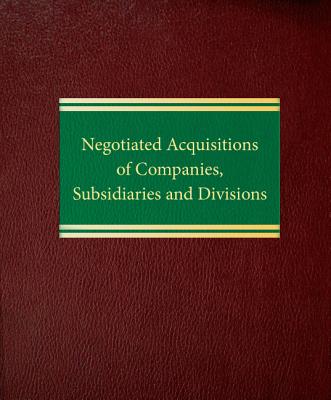 "If you're looking for a soup-to-nuts guide on acquiring companies and subsidiaries, there's a tried-and-true book for you....The Negotiated Acquisitions of Companies, Subsidiaries and Divisions book (a two-volume set) provides everything you may need, from the basic structure of the deal to closings, and everything in between." -- J. Craig Williams, www.mayitpleasethecourt.com

Learn the "shop secrets" that can help you negotiate the labyrinths of mergers and acquisitions. This masterful resource analyzes the relevant law and provides a strong dose of practice. It includes advice on structuring deals, negotiating agreements, identifying issues and solving the real problems that are likely to arise during the acquisition. The authors, skilled veterans of numerous corporate transactions, provide expert practical guidance, from the planning stages to post-closing.

Negotiated Acquisitions of Companies, Subsidiaries and Divisions is divided into several parts: planning transactions and advising boards; general and special provisions of the acquisitions agreement; and special topics, such as LBOs and troubled companies. You'll find everything from basic corporate, tax and accounting considerations to detailed analysis of representations, warranties, covenants and closing conditions. Novices as well as experienced practitioners will benefit from discussions of: mergers of equals; cash election mergers; fairness opinions; Sarbanes-Oxley; special committees of disinterested directors; intellectual property concerns; due diligence; and much more. You'll also learn about the latest developments, including techniques for handling economic uncertainty and stock market instability.

Lou R. Kling is a partner at Skadden, Arps, Slate, Meagher & Flom LLP in New York. He has extensive experience in mergers and acquisitions of public and private companies, subsidiaries and divisions, including negotiated and contested acquisitions, leveraged buyouts and recapitalizations. He has also represented borrowers, issuers, underwriters and lenders in a broad spectrum of financing transactions. Mr. Kling is a permanent member of the firm's Policy Committee, its top governing committee, and is currently co-chairman of the firm's Opinion Committee and chairman of the Financial Oversight and Audit Committee. Kling was named a "Dealmaker of the Year" in 2016 by American Lawyer Magazine. Eileen T. Nugent is a mergers and acquisitions partner at Skadden, Arps, Slate, Meagher & Flom LLP in New York. She has worked on a wide variety of acquisitions and dispositions of companies, subsidiaries and divisions, both public and private, hostile and negotiated, in the United States and around the world. A significant number of these transactions have been leveraged buyouts (LBOs), and she is co-head of the Firms Private Equity Group. Ms. Nugent has represented, a full range of transactional parties, including buyers, sellers and controlling stakeholders, boards of directors and special committees, LBO organizers and management teams, as well as investment bankers and various financing sources. She has worked on numerous recapitalizations and other reverse LBO transactions, such as initial public offerings, and is one of the firms leading practitioners in the field of M&A and restructuring of financially distressed companies. The breadth of her experience has resulted in her being the "go-to" expert as a senior legal, business and strategic advisor to her clients, particularly in the areas of corporate governance and conflict-of-interest situations, including dealing with significant stockholders. Nugent was named to the The National Law Journal's list of 2015 "Trailblazers." Brandon Van Dyke focuses his practice on mergers and acquisitions and corporate and securities law matters. Mr. Van Dyke has represented acquirers, targets and financial advisors in a number of significant U.S. and cross-border mergers, acquisitions, takeovers (both negotiated and contested), leveraged buyouts and other corporate matters. In addition, he has provided transactional advice to companies implementing corporate restructuring plans. Industries in which Mr. Van Dyke has had substantial transactional involvement include media and entertainment, mining and metals, chemicals, pharmaceutical and health care. In 2016, Mr. Van Dyke was named a "Dealmaker of the Year" by The American Lawyer. Also in 2016, Mr. Van Dyke was named an "M&A Rising Star" by Law360. In 2012 The M&A Advisor selected him as one of the top 40 M&A professionals under the age of 40.