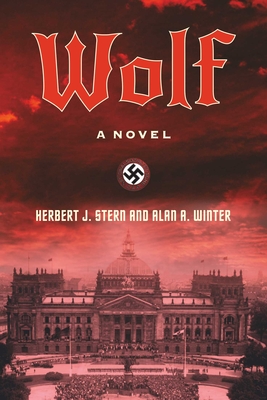 In the Great Tradition of Herman Wouk, Author of Winds of War and War and Remembrance, Wolf is a Thoroughly Researched Historical Novel about a Man who is Not Yet a Monster . . . but Will Soon Become the Ultimate One: Adolf Hitler.

Perhaps no one is more controversial or more hated than Adolf Hitler. Yet questions remain about how this seemingly unremarkable man gained power to become one of the most diabolical dictators of all time. Based on extensive research, the historical novel Wolf lifts the curtain on Hitler’s secret life, revealing truths that have been hidden for one hundred years.

The story begins as World War I is ending, when the fictional character Friedrich Richard meets Hitler in the mental ward of Germany’s Pasewalk Hospital. Hitler, a.k.a. Wolf, is an army corporal suffering from hysterical blindness. Unable to see or care for himself, the future Führer relies upon Friedrich for assistance, and the two men form an unbreakable bond.

As Wolf progresses, Friedrich becomes history’s eyes and ears. Interacting with real people, places, and events during a fifteen-year time frame, Friedrich watches Hitler evolve step-by-step into a megalomaniacal dictator. A book for history buffs and fiction fans alike, this remarkable thriller presents a fully-realized, flesh-and-blood Hitler that is more realistic and more chilling than any we’ve seen before.

Herbert J. Stern, formerly US attorney for the District of New Jersey, who prosecuted the mayors of Newark, Jersey City and Atlantic City, and served as judge of the US District Court for the District of New Jersey, is a trial lawyer. He also served as judge of the United States Court for Berlin. There he presided over a hijacking trial in the occupied American Sector of West Berlin. His book about the case, Judgment in Berlin, won the 1974 Freedom Foundation Award and became a film starring Martin Sheen and Sean Penn. He also wrote Diary of a DA: The True Story of the Prosecutor Who Took on the Mob, Fought Corruption, and Won, as well as the multi-volume legal work Trying Cases to Win.

Alan A. Winter  is the author of four novels, including Island Bluffs, Snowflakes in the Sahara, Someone Else’s Son, and Savior’s Day, which Kirkus selected as a Best Book of 2013. Winter graduated from Rutgers University with a degree in history and has professional degrees from both New York University and Columbia, where he was an associate professor for many years. He edited an award-winning journal and has published more than twenty professional articles. Alan studied creative writing at Columbia’s Graduate School of General Studies. His screenplay, Polly, received honorable mention in the Austin Film Festival, and became the basis for Island Bluffs.

"A deeply researched novel about Hitler's rise to power, co-authored by Stern, a former federal judge, and Winter, a novelist....The fictional narrator proves a great tool to show Hitler up close, based on the authors' research. For example, historians often portray Hitler as pathologically afraid of women. Richard tells a woman that 'Hitler's romance is with Germany,' not with fräuleins, but Hitler is attracted to young women and girls, including his niece Geli, who commits suicide after ol' Uncle Adolf leaves her for another woman....As the novel ends, the horrors are only beginning. An engrossing look at a monster." —Kirkus Review

“Wolf: A Novel is a historical novel about Hitler, told from the unusual perspective of 1918 amnesiac soldier Friedrich Richard, who encounters Hitler in a mental hospital ward where Corporal Hitler, once a painter, has been diagnosed as a psychopath....It is fortuitous that Herbert J. Stern and Alan A. Winter chose to couch Hitler's life in an alias name, because readers who may have eschewed yet another novel with Hitler in the title, who picked up Wolf for other reasons, will find it an astute, involving, unusual perspective that considers Hitler's mental facilities in a different way. This focus on Hitler's personal life and how he rose to power is based on extensive research, yet the fictional devices elevate these facts to more personal, revealing levels as Hitler hones political power, creates a new ideology for a crippled nation, and involves Frederich in a rise to power that surprises and fulfills them both. In addition to its different approach to Hitler's rise to power, Wolf: A Novel excels in many other ways. Its use of the first person makes events and perceptions more immediate; its subplot of the protagonist's dilemma in following Hitler versus his own inherent rejection of Hitler's anti-Semitism creates an involving conflict; and its focus on Hitler's lifelong friendships, which cemented personal connections in his life, all expand the reader's view of Hitler's personality and the roots of his influences. The authors studied Hitler's personal connections for this book, so these insights and ideas aren't fiction, but are firmly rooted in new research that lends depth to his persona and story. As additional support for the historical research and accuracy of this story, history buffs have rare access to the authors' research at the website www.NotesOnWolf.com....Frightening and eye-opening, Wolf: A Novel will linger in the mind as a prophetic and disturbing story long after Frederich and Hitler's world (and this story) ends." —Midwest Book Review

“Adolf Hitler anointed himself with the name, Wolf, then plotted and connived with remorseless determination to become Der Fuhrer, Dictator, Savior of the Fatherland. As in ancient Greek drama, we know the ending to the story. The riddle is how we get there….A Hitler we did not know existed emerges page by page, all his bits and pieces, certain of his role as Savior of Germany, evil, driven, shrewd, an unrepentant, serial seducer of teenage girls, surrounded by toadies as ruthless as himself but not nearly so smart—his rise and words an unnerving parallel as we witness the continued erosion of democracy today in our own sweet land.  Put this book on the shelf with Ludlum, Michener, and Clavell. Wolf deserves to be in their company.”
—Stephen Foreman, author of Toehold, Watching Gideon, and Journey, and screenwriter of The Jazz Singer, Hostage, and America the Beautiful

“Based on extensive research, the extraordinary novel Wolf, by Herbert J. Stern and Alan A. Winter, lifts the curtain so that the reader can observe through the eyes of a fictional character how a seemingly unremarkable corporal who was denied a promotion for lack of ‘leadership ability’ became dictator of Germany. The result is a gripping page-turner, a masterful historical novel."
—The Jewish Voice

“Wolf offers a front row seat to the Nazi Party’s early years, expertly using the fictional protagonist Friedrich Richard to take the reader on a fifteen-year journey from the end of the First World War to Adolf Hitler’s seizure of absolute power in Germany. The reader experiences the gradual death of democracy in Weimar Germany like a slow-motion train wreck, equally fascinated and horrified. We all know how Hitler’s Thousand Year Reich ended, but Wolf shows us how the nightmare began. A compelling, thoroughly researched, and important work. Wolf is an impressive achievement. Exhaustively researched and richly detailed, it draws on new historical research to paint a fascinating portrait of Adolph Hitler that is more human and recognizable than most depictions—and thus even more chilling and sobering.”
—Alex DeMille, co-author of The Deserter with bestselling author Nelson DeMille

“Wolf will incite intense discussion in historical circles and book clubs alike. It is a poignant, persuasive, and ultimately terrifying story of how one man came to bend the path of history through oppression and genocide by taking one step at a time.”
—Amy Wilhelm, senior writer, Book Club Babble

"Wolf, by Herbert J. Stern and Alan A. Winter, is a thought-provoking novel based on extensive research, a masterpiece of historical fiction that brings to life the years of those critical events between WWI and WWII....An exquisitely written, absorbing read, that I completely inhaled....This is a brilliantly written book, with its atmospheric  descriptive details and absorbing narration, that will stay with you long after you close the  book....A breathtaking novel that gives the reader the opportunity to be front and center in a dark and emotional time during this period of our world’s history."
—Gwendalyn Books, gwendalynbooks.blog

"This is truly a stunning piece of literature. It’s riveting, fascinating, and it draws you in. If you’re like me, you may try to see a human side to Wolf....You always see Hitler as how he was as a dictator, at his full amount of power. But my mind always wonders, what led him to where he was? What was he like? Did something happen to get him there? In Wolf, we see him and it is equal parts terrifying and interesting because as a reader, we know what he becomes. We know what lay ahead and it literally feels like a roller coaster that is heading off the rails—you’re not getting off. You’re far too involved and invested. It’s truly astonishing. The research gone into this work is to be praised. I don’t think there’s anything about this that they didn’t research. I am always a sucker for good research. It felt so real, so visceral. I learned so much and I also learned, there is no sense in trying to humanize him. I absolutely enjoyed this book and its unique view. It certainly opened up my eyes."
—The Quirky Lady Bookworm