Death at the Edges of Empire: Fallen Soldiers, Cultural Memory, and the Making of an American Nation, 1863-1921 (Studies in War, Society, and the Military) (Hardcover) 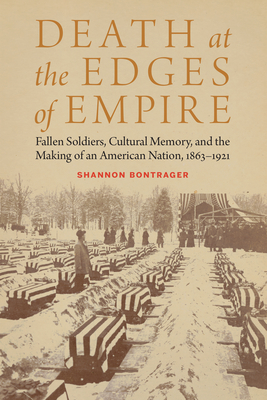 Hundreds of thousands of individuals perished in the epic conflict of the American Civil War. As battles raged and the specter of death and dying hung over the divided nation, the living worked not only to bury their dead but also to commemorate them. President Abraham Lincoln’s Gettysburg Address perhaps best voiced the public yearning to memorialize the war dead. His address marked the beginning of a new tradition of commemorating American soldiers and also signaled a transformation in the relationship between the government and the citizenry through an embedded promise and obligation for the living to remember the dead.

In Death at the Edges of Empire Shannon Bontrager examines the culture of death, burial, and commemoration of American war dead. By focusing on the Civil War, the Spanish-Cuban-American War, the Philippine-American War, and World War I, Bontrager produces a history of collective memories of war expressed through American cultural traditions emerging within broader transatlantic and transpacific networks. Examining the pragmatic collaborations between middle-class Americans and government officials negotiating the contradictory terrain of empire and nation, Death at the Edges of Empire shows how Americans imposed modern order on the inevitability of death as well as how they used the war dead to reimagine political identities and opportunities into imperial ambitions.

Shannon Bontrager is an associate professor of history at Georgia Highlands College in Cartersville, Georgia.

“Shannon Bontrager’s Death at the Edges of Empire joins a list of other seminal works on war and memory, such as Kristin Hass’s Carried to the Wall. He shows the importance of culture on shaping American narratives regarding war. It is a very important addition to the literature. Highly recommended!”—Kyle Longley, author of Grunts: The American Combat Soldier in Vietnam
— Kyle Longley

“Dense and absorbing. I’m particularly impressed by Bontrager’s deft rhetorical analysis of various speeches—many of them by presidents—delivered at remembrance functions between 1863 and 1921. . . . This is an effective way of tracking the ideological twists and turns in American war commemoration. In addition, the author knows how to tell a story. Some of my favorite sections of this book are simply compelling narratives.”—Steven Trout, professor of English at the University of South Alabama
— Steven Trout