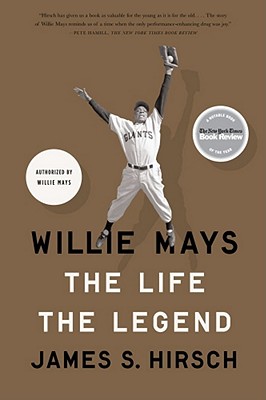 “Willie Mays has ridden on Air Force One, been used as an example by Bob Dylan in song and is, possibly, the best baseball player ever. Yet there never has been a definitive biography of this American icon. Michael Hirsch rectifies that error in this comprehensive account of a man of surpassing physical ability and extraordinary depth.”
— Bill Cusumano, Nicola's Books, Ann Arbor, MI

Willie Mays is arguably the greatest player in baseball history, still revered for the passion he brought to the game. He began as a teenager in the Negro Leagues, became a cult hero in New York, and was the headliner in Major League Baseball’s bold expansion to California. He was a blend of power, speed, and stylistic bravado that enraptured fans for more than two decades. Now James Hirsch reveals the man behind the player.

Mays was a transcendent figure who received standing ovations in enemy stadiums and who, during the turbulent civil rights era, urged understanding and reconciliation. More than his records, his legacy is defined by the pure joy that he brought to fans and the loving memories that have been passed to future generations so they might know the magic and beauty of the game. With meticulous research and drawing on interviews with Mays himself as well as with close friends, family, and teammates, Hirsch presents a brilliant portrait of one of America’s most significant cultural icons.

James S. Hirsch is former reporter for The New York Times and The Wall Street Journal. He is the author of four nonfiction books, including the New York Times bestseller. Hurricane: The Miraculous Journey of Rubin Carter, which was the basis for the film of the same name starring Denzel Washington. Hirsch is a graduate of the University of Missouri School of Journalism and has a master’s degree from the LBJ School of Public Affairs at the University of Texas. He lives in the Boston area with his wife, Sheryl, and their children, Amanda and Garrett. Born and raised in St. Louis, he remains a diehard Cardinal fan.

"Willie Mays had everything--except a first-rate biography. That omission has now been addressed by James S. Hirsch, who has produced a piece of artistry worhty of Mays in center field."--Bloomberg.com

"James Hirsch has written an enormously entertaining and wide-ranging biography--a fitting tribute to Mays . . . and a thoughtful account of the complex and often misunderstood man. . . . True baseball fans will delight in the author's edge-of-seat game reports and picture-perfect descriptions of Mays' superlative talents. . . This is a superb baseball book, but it's also a riveting narrative of Mays' life and times."--Seattle Times

"A terrific new biography . . . [an] always engaging and enlightening book . . . A wonderful introduction to the magical life of one of the finest athletes ever."--San Francisco Chronicle

"Hirsch has produced a masterful biography that has the same freshness and excitement that Mays generated as a player. All the highlights are there in shining, solid detail. It's a must-read for any baseball fan."--Tampa Bay Online

"James S. Hirsch compellingly recounts Mays' career . . . giving even Mays' iconic moments, such as 'The Catch' in the 1954 World Series, a sense of tension as if they were unfolding anew. . . . Great baseball reading, by an accomplished writer . . . about a wondrous ballplayer and man with gifts beyond the diamond."--Associated Press

“Does a better job than any book before of getting at what it means to be Willie Mays.”—Sports Illustrated