The Character of Meriwether Lewis: Explorer in the Wilderness (Paperback) 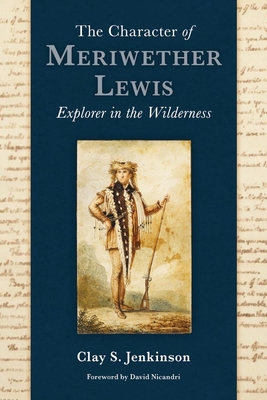 By Clay S. Jenkinson
Email or call for price.
Hard to Find

The human aspects of the famed explorer, in a revised and expanded biography

Meriwether Lewis commanded the most important exploration mission in the early history of the United States. Clay S. Jenkinson takes a fresh look at Lewis, not to offer a paper cutout hero but to describe and explain a hyperserious young man of great complexity who found the wilderness of Upper Louisiana as exacting as it was exhilarating.

Jenkinson sees Lewis as a troubled soul before he left St. Charles, Missouri, in May 1804. His experiences in lands upon which the foot of civilized man had never trodden further fractured his sense of himself. His hiring William Clark as his partner in discovery was, Jenkinson shows, the most intelligent decision he ever made. When Clark was nearby, Lewis's leadership was stable and productive. When Clark was absent and thus unable to provide a calming influence on his mercurial friend, Lewis tended to get into trouble. Jenkinson argues that if Clark had been with Lewis on the Natchez Trace, the governor of Upper Louisiana would not have killed himself. Jenkinson sees Lewis's 1809 suicide not as an inexplicable mystery, but the culmination of a series of pressures that extend back to the expedition and perhaps even earlier.

The Character of Meriwether Lewis: Explorer in the Wilderness is a revision of an earlier book, greatly expanded with new scholarship and insights gained through Jenkinson's extensive participation in the Lewis and Clark Expedition Bicentennial. Jenkinson discusses Lewis's sense of humor, his oft-stated fear that the expedition he was leading might collapse, his self-conscious learnedness, and his inability to re-enter polite society after his return. The book attempts to reconstruct from Lewis's journal entries and letters his rich, troubled personality and his aspirations to heroism. When the American mythology surrounding him is removed and Lewis is allowed to reveal himself, he emerges as a fuller, more human, and endlessly fascinating explorer.