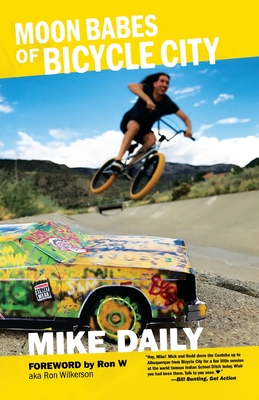 By Mike Daily, Nathan Powell (Designed by), Ron Wilkerson (Foreword by)
Email or call for price.
Usually Ships in 1-5 Days

The first 2-Hip Meet the Street BMX contest that Ron Wilkerson held in Southern California on 4/30/88 is a significant event that Mike Daily builds upon in Moon Babes of Bicycle City. The book starts on Friday, 10/11/19, with Rodderick Moon and Mick O'Grady pedaling Rodd's bikecar replica of the '76 Chrysler Cordoba that Ron W had at the contest.

Rodd and Mick are pedaling the bikecar from Cavern City Air Terminal in Carlsbad, New Mexico, to Bicycle City, where cars have been outlawed and the terrain is a world like no other. Rodd Moon and his wife Chatauqua run a bike shop there called Moon Babes Retire Bikes.

Rodd's prototype "2020 BikeCardoba" is primer grey in the opening scenes. It's prepped to be duct taped, spray painted, and thrashed as an obstacle on Saturday, 10/12/19.

The First Printing of only 100 copies was a pocket-size paperback that readers received by Friday, 10/11/19--the exact date of the novel's opening scenes. MBoBC Bike Club Members received their copies (and limited edition merch extras including poster prints of the 2-Hip Cordoba, stacks of stickers, and much more) direct from the author in time to read the book in "real time" if they chose to do so.

A modern day monument to BMX Freestyle culture and innovative fiction, this "Second Printing Forever" (4/3/20) of Mike Daily's new novel Moon Babes of Bicycle City is a remastered edition that features a Foreword by Ron W, an Afterword by Matt D'Angelo, and a timeline tracking reader-participation milestones.