Fate is the Hunter: A Pilot's Memoir (Paperback) 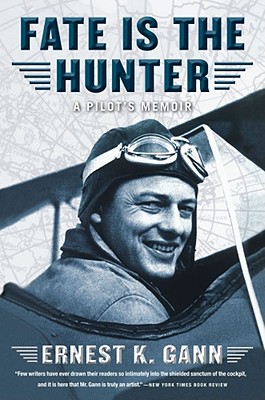 Ernest K. Gann’s classic pilot's memoir is an up-close and thrilling account of the treacherous early days of commercial aviation. “Few writers have ever drawn readers so intimately into the shielded sanctum of the cockpit, and it is hear that Mr. Gann is truly the artist” (The New York Times Book Review).

“A splendid and many-faceted personal memoir that is not only one man’s story but the story, in essence, of all men who fly” (Chicago Tribune). In his inimitable style, Gann brings you right into the cockpit, recounting both the triumphs and terrors of pilots who flew when flying was anything but routine.

Ernest K. Gann was an American aviator, author, sailor, and conservationist. He is known for his novels Island in the Sky and The High and the Mighty and his classic memoir of early commercial aviation Fate Is the Hunter, all of which were made into major motion pictures. He died in 1991.

"Mr. Gann is a writer saturated in his subject; he has the skill to make every instant sharp and important and we catch the fever to know that documentary writing does not often invite."
— V.S. Pritchett

"This book is an episodic log of some of the more memorable of [the author's] nearly ten thousand hours aloft in peace and (as a member of the Air Transport Command) in war. It is also an attempt to define by example his belief in the phenomenon of luck -- that 'the pattern of anyone fate is only partly contrived by the individual.'"
— The New Yorker

"Few writers have ever drawn their readers so intimately into the shielded sanctum of the cockpit, and it is here that Mr. Gann is truly the artist."
— New York Times Book Review

"Fate Is the Hunter is partly autobiographical, partly a chronicle of some of the most memorable and courageous pilots the reader will ever encounter in print; and always this book is about the workings of fate. . . . The book is studded with characters equally as memorable as the dramas they act out."
— Cornelius Ryan, author of A Bridge Too Far and The Longest Day

"This fascinating, well-told autobiography is a complete refutation of the comfortable cliché that 'man is master of his fate.' As far as pilots are concerned, fate (or death) is a hunter who is constantly in pursuit of them. . . . There is nothing depressing about Fate Is the Hunter. There is tension and suspense in it but there is great humor too. Happily, Gann never gets too technical for the layman to understand."
— Saturday Review

"This purely wonderful autobiographical volume is the best thing on flying and the meaning of flying that we have had since Antoine de Saint-Exupéry took us aloft on his winged prose in the late 1930s and early 1940s. . . . It is a splendid and many-faceted personal memoir that is not only one man's story but the story, in essence, of all men who fly."
— Chicago Sunday Tribune