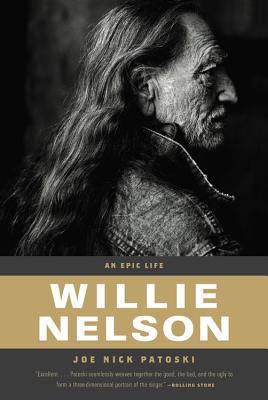 From his first performance at age four, Willie Nelson was driven to make music and live life on his own terms. But though he is a songwriter of exceptional depth - "Crazy" was one of his early classics - Willie only found success after abandoning Nashville and moving to Austin, Texas.

Red Headed Stranger made country cool to a new generation of fans. Wanted: The Outlaws became the first country album to sell a million copies. And "On the Road Again" became the anthem for Americans on the move. A craggy-faced, pot-smoking philosopher, Willie Nelson is one of America's great iconoclasts and idols.

Now Joe Nick Patoski draws on over 100 interviews with Willie and his family, band, and friends to tell Nelson's story, from humble Depression-era roots, to his musical education in Texas honky-tonks and his flirtations with whiskey, women, and weed; from his triumph with #1 hit "Always On My Mind" to his nearly career-ending battles with debt and the IRS; and his ultimate redemption and ascension to American hero

Joe Nick Patoski is the author of the award-winning Willie Nelson: An Epic Life as well as biographies of Stevie Ray Vaughan and Selena. He has written for Texas Monthly, Rolling Stone, No Depression, Country Music, TV Guide, and the Austin American-Statesman. He lives in the Texas Hill Country.

Drawing on interviews with Nelson and his widely extended "family," Patoski pulls together a rich narrative that keenly comprehends Nelson's artistic and geographical perambulations. The author is especially fine in the early going, colorfully recalling Willie's many years on the beer-joint circuit and the cast of sketchy characters who trod those hardwood floors. But Nelson doesn't get any free passes: Patoski dwells in depth on his capriciousness, quick temper, hard-partying lifestyle, infidelities and four tempesturous marriages, as well as his headline-making '90s tax case. The result is a warm, honest portrait of a compulsively footloose, restless artist at home in any musical style ... and truly at home only on his tour bus.

Patoski's profound understanding of Nelson's life, character and milieu make this the Willie bio to get.

This impressive, entertaining chronicle of Willie Nelson's life is replete with exactly what you'd expect-honky-tonk, long nights on the open road, whiskey, womanizing and weed-but Texas writer Patoski (Stevie Ray Vaughan: Caught in the Crossfire, Texas Mountains) looks beyond country music trappings to find the funny, talented, determined man who became an unlikely icon. ... Patoski conducted over a hundred interviews for this thorough, well-noted "epic," peopling it with "pickers, gypsies, pirates, vagabonds, wanderers and carneys," including fellow performers like Kris Kristofferson, Kinky Friedman and Leona Williams. Writing with an affectionate country twang, Patoski gives his subject the consideration he deserves in a fine, fluid piece of storytelling that any Nelson fan will appreciate.—Publisher's Weekly

An expansive, engrossing, and epic look at the life of a true American icon. Required reading for music fans and scholars. Former Texas Monthly writer Patoski infuses his biography of Willie Nelson with an encyclopedic knowledge of Texas history that deftly illuminates the depth of influence the land and people of Texas had in shaping Nelson. Hundreds of interviews are seamlessly interwoven as Patoski traces Nelson's journey from young musical prodigy raised by his grandparents in Abbot, TX, to fledgling songwriter flush with the early success of 'Crazy.' Nelson's perilous, unsuccessful navigation of the Nashville country music establishment is thoroughly recounted, as is his redemptive relocation to Austin, where he recorded organic, successful albums like Red Headed Stranger that cemented his status as a visionary musician and resourceful outsider. The author's deep, intimate knowledge of Texas and informed love of country music add layers of nuance and detail to his portrait of the complex singer.—Library Journal