The Arrangement: A Novel (Hardcover) 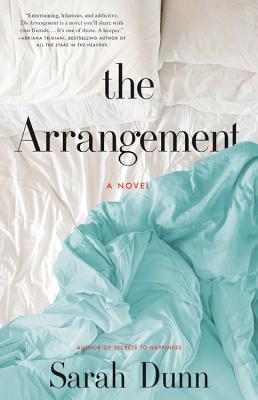 A hilarious and emotionally charged national bestseller about a couple who embark on an open marriage -- what could possibly go wrong?

Lucy and Owen, ambitious, thoroughly-therapized New Yorkers, have taken the plunge, trading in their crazy life in a cramped apartment for Beekman, a bucolic Hudson Valley exurb. They've got a two hundred year-old house, an autistic son obsessed with the Titanic, and 17 chickens, at last count.

It's the kind of paradise where stay-at-home moms team up to cook the school's "hot lunch," dads grill grass-fed burgers, and, as Lucy observes, "chopping kale has become a certain kind of American housewife's version of chopping wood." When friends at a wine-soaked dinner party reveal they've made their marriage open, sensible Lucy balks.

There's a part of her, though-the part that worries she's become too comfortable being invisible -- that's intrigued. Why not try a short marital experiment? Six months, clear ground rules, zero questions asked. When an affair with a man in the city begins to seem more enticing than the happily-ever-after she's known for the past nine years, Lucy must decide what truly makes her happy: "real life," or the "experiment?"

Sarah Dunn is a novelist and television writer whose credits include Spin City (for which she co-wrote Michael J. Fox's farewell episode) and the critical darling Bunheads, which you would have loved. Her debut novel, The Big Love, is available to read in nineteen languages. Dunn is also the creator and executive producer of the 2016 ABC series, American Housewife. She lives outside New York City with her family and their seventeen chickens.

"Daring and darkly funny, Sarah Dunn's THE ARRANGEMENT is this summer's must-read. Her take on middle-age and family life is wry, poignant and spot-on. Readers will recognize themselves and their friends in this wonderfully comic novel."
—Candace Bushnell, author of Sex and the City

"A hilarious, spot-on comedy of the heart about middle-aged marriage and what happens when it goes off the rails."
—Maria Semple, author of Where'd You Go, Bernadette

"Sarah Dunn's novels are literary flume rides. You're in a world you think you know, with a couple you swear you know, and in an instant, the world is turned upside down. You hold on because the story is entertaining, hilarious, and addictive. But, Ms. Dunn also writes complicated human beings who struggle, make mistakes, and are redeemed. THE ARRANGEMENT is a novel you'll share with your friends. You'll talk about it. You'll return to it. It's one of those. A keeper."—Adriana Trigiani, author of All the Stars in the Heavens

"THE ARRANGEMENT is a comic masterpiece that exposes the unbearable paradoxes of love."
—Delia Ephron, author of Siracusa

"Sarah Dunn has written an irresistibly JUICY novel about a couple who try an unconventional experiment in an attempt to revitalize their marriage. This story, addictive from the very first pages, becomes not only more tantalizing as it unfolds but also more thought-provoking. The Arrangement will both shock and delight you."—Elin Hilderbrand, author of Here's to Us

"If you've been wondering what an experiment in open marriage might be like, try Sarah Dunn's deliciously inventive novel"
—Elle

"Dunn writes a genuinely surprising read that is worth checking out."
—RT Book Reviews

"Dunn's peek inside a seemingly normal relationship exposes the deepest thoughts of a husband, wife, and the people they decide to include in their experiment. Lucy and Owen are relatable, realistic, and resilient, and Dunn's television-writing background is evident in her witty dialogue. She grounds her novel in the minutia of suburban life, contrasting the heady days of new romance with school drop-offs and soccer games. Fans of Matthew Norman, Greg Olear, and Meg Wolitzer will adore this engaging and exhilarating exposé."
—Booklist

As hilarious as it is sensitive. From raising chickens to children, copping your own kid's ADD medication to cancer, Dunn expertly reveals the intricacies that make up a marriage. Her characters are sure to strike a chord with readers, as they struggle to define themselves and their roles as spouses. Dunn makes her mark in women's fiction with this multilayered novel that takes readers from funny to serious in a story full of truths, lies, and everything in between.
—Library Journal

"[THE ARRANGEMENT is] a polished, amusing, and highly entertaining take on modern relationships, parenthood, and suburbia....[Dunn] is a total pro-and the book is smartly conceived, sharply written, perfectly paced, and, even at its most madcap moments, entirely believable and engaging. Despite Owen and Lucy's self-made troubles, they are eminently sympathetic and disarmingly appealing, as are the parade of amusing supporting characters and plotlines... Dunn's dryly humorous story about a marriage that goes dangerously off-road never loses its groove."
—Kirkus, Starred Review

"This funny, honest novel pushes you to ponder what makes us happy."
—Good Housekeeping

"The book charms with the author's compassion for all her foolish, bumbling characters...The Arrangement will make you smile."—BookPage

"Sarah Dunn's take on that point in middle-aged married life when everything falls apart is pure comedic genius, and you will absolutely find yourself looking at everyone you know and wondering who in the novel they most resemble."
—Newsweek

"For couples who have ever considered having an open marriage, or relationship, or whatever - sure, go ahead, have an affair - pick up a copy of Sarah Dunn's novel first. Because it's possible "The Arrangement" could push couples on the fence one way or the other, as she delves into the lives of one duo weighing whether to give that "open marriage" a test drive...Of course, rules are broken, as are hearts and lives even in their cozy little suburban bunker. And Dunn writes it all with a removed grace."
—St. Louis Post Dispatch

"Sarah Dunn has a terrific eye for the absurd, especially the ridiculous in everyday life....Dunn's harpooning of the self-righteous denizens of Beekman is deliciously spot-on... It's an arrangement worth telling - and reading."
—Newark Star Ledger

"Author Dunn is a bit of a genius when it comes to depicting upper-middle-class social mores, and this book will have readers snorting (yes, snorting) with laughter."

"Dunn has perfectly captured middle-aged marriage, with its mix of the boring quotidian and moments of deep happiness. . .Readers will be laughing helplessly as circumstances grow ever more fraught, but will also muse about what makes a truly happy marriage possible."
—Shelf Awareness

"Dunn has a keen eye for the comforts and absurdities of upscale suburban life...Sensible insights about love are the novel's ultimate destination, but the ride is wildly entertaining."
—People

"This funny and relatable tale from the writer who crafted many of the mishap-laden stories on Murphy Brown and Spin City delivers the perfect escapist read in these angsty political times."—Esquire

"The Arrangement may, one day, connote Late-Hipster America," and comparing it to "Bob and Carol and Ted and Alice."
—Roar Feminist

"Set against the delightful, carnivalesque backdrop of small-town gossip, politics, and drama, The Arrangement is a bit of a cautionary tale for those in LTRs IRL, and a stark reminder that visibility is key."—Kirkus

"'The Arrangement' is a humorous, sometimes light-hearted, but in-the-end poignant look at life in a small, fictional town situated on the Hudson River in New York."
—NPR's Here and Now

"The premise is wonderfully intriguing...Ms. Dunn does a fantastic job of unspooling the reasons why each agrees to this over the course of the book."
—Pittsburgh Post-Gazette

"This story is equally funny as it is emotional."
—Fab Fit Fun

"The way this novel pushes and explores boundaries is commendable".
—Globe and Mail

"Fans of Maria Semple, Delia Ephron, and Candace Bushnell will delight in this smart, hilarious, sympathetic portrayal of a marriage temporarily 'opened' to others."
—B&N Reads

"A cleverly observed, wickedly accurate book, a
cautionary tale to all those happily married midlifers who are bored with
contentment and think it might be fine to each have a brief time in the greener
grass."