The Catskills: Its History and How It Changed America (Hardcover) 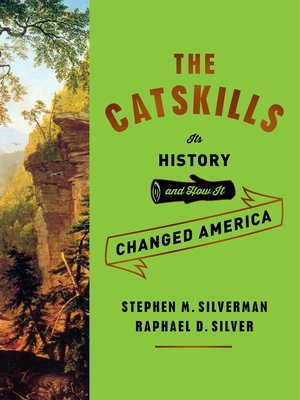 The Catskills (“Cat Creek” in Dutch), America’s original frontier, northwest of New York City, with its seven hundred thousand acres of forest land preserve and its five counties—Delaware, Greene, Sullivan, Ulster, Schoharie; America’s first great vacationland; the subject of the nineteenth-century Hudson River School paintings that captured the almost godlike majesty of the mountains and landscapes, the skies, waterfalls, pastures, cliffs . . . refuge and home to poets and gangsters, tycoons and politicians, preachers and outlaws, musicians and spiritualists, outcasts and rebels . . .

Stephen Silverman and Raphael Silver tell of the turning points that made the Catskills so vital to the development of America: Henry Hudson’s first spotting the distant blue mountains in 1609; the New York State constitutional convention, resulting in New York’s own Declaration of Independence from Great Britain and its own constitution, causing the ire of the invading British army . . . the Catskills as a popular attraction in the 1800s, with the construction of the Catskill Mountain House and its rugged imitators that offered WASP guests “one-hundred percent restricted” accommodations (“Hebrews will knock vainly for admission”), a policy that remained until the Catskills became the curative for tubercular patients, sending real-estate prices plummeting and the WASP enclave on to richer pastures . . .

Here are the gangsters (Jack “Legs” Diamond and Dutch Schultz, among them) who sought refuge in the Catskill Mountains, and the resorts that after World War II catered to upwardly mobile Jewish families, giving rise to hundreds of hotels inspired by Grossinger’s, the original “Disneyland with knishes”—the Concord, Brown’s Hotel, Kutsher’s Hotel, and others—in what became known as the Borscht Belt and Sour Cream Alps, with their headliners from movies and radio (Phil Silvers, Eddie Cantor, Milton Berle, et al.), and others who learned their trade there, among them Moss Hart (who got his start organizing summer theatricals), Sid Caesar, Lenny Bruce, Mel Brooks, Woody Allen, and Joan Rivers.

Here is a nineteenth-century America turning away from England for its literary and artistic inspiration, finding it instead in Washington Irving’s “Rip Van Winkle” and his childhood recollections (set in the Catskills) . . . in James Fenimore Cooper’s adventure-romances, which provided a pastoral history, describing the shift from a colonial to a nationalist mentality . . . and in the canvases of Thomas Cole, Asher B. Durand, Frederick Church, and others that caught the grandeur of the wilderness and that gave texture, color, and form to Irving’s and Cooper’s imaginings.

Here are the entrepreneurs and financiers who saw the Catskills as a way to strike it rich, plundering the resources that had been likened to “creation,” the Catskills’ tanneries that supplied the boots and saddles for Union troops in the Civil War . . . and the bluestone quarries whose excavated rock became the curbs and streets of the fast-growing Eastern Seaboard.

Here are the Catskills brought fully to life in all of their intensity, beauty, vastness, and lunacy.

STEPHEN M. SILVERMAN is a twenty-year veteran of Time Inc. and was the founding editor of People.com. His books include biographies of the filmmakers David Lean and Stanley Donen, and his work has appeared in Esquire, Harper's Bazaar, The New York Times, The Times (London), Vogue, and The Washington Post. He lives in New York City.

RAPHAEL D. SILVER grew up in Cleveland, Ohio, the son of a rabbi, and lived in New York City until his death in 2013. A real-estate developer, he founded Silverfilm with his wife, director Joan Micklin Silver, and produced her Hester Street and Crossing Delancey. His first novel, Congregation, was published posthumously.

Excitement about Stephen Silverman’s
THE CATSKILLS

“Should be commended for its sheer ambition . . . engaging . . . Although we think we may have read some of this in different form elsewhere, it puts everything—or almost everything—together in one place, providing texture, context, chronology, and a narrative framework for a region with a history as rich and abundant as the fare served at any of its storied hotels.”
— Jack Schwartz, Daily Beast

“I love this book. The Catskills shaped my life. I will forever be grateful to those tough Jewish audiences. If you could make them laugh, you could conquer the world."
— Mel Brooks