At the Edge: Riding for My Life (Paperback) 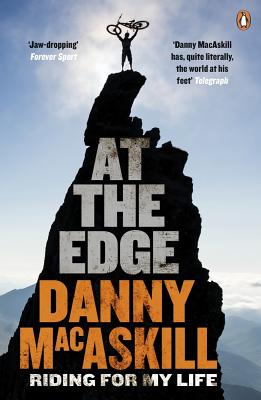 By Danny MacAskill
Email or call for price.
Special Order

Danny MacAskill is legendary for his YouTube viral videos like The Ridge, Cascadia, and Imaginate: nerve-racking montages of stunts which scale mountain peaks, rooftops, ghost towns, and movie sets. His life is one of thrills, bloody spills, and millions of online hits. It hasn't been an easy ride. Doubt, stress, and the "what if?" factor circle every trailblazing trick, which require imagination, fearlessness, groundbreaking techniques, and an eye for a good camera angle. In this unflinching memoir of mayhem, Danny shares his anarchic childhood on the Isle of Skye and early days as a street trials rider, takes us behind the scenes of his training and videos, shares never-seen-before sketches from his personal notebook, and reveals what it takes to go the next level—both mentally and physically. Join Danny for a nerve-shredding ride. Just be sure to bring a crash helmet.

Danny MacAskill is professional street trials rider for Red Bull and Santa Cruz Bicycles. He has built more than 150 million YouTube hits with films including "The Ridge"—an epic ride across the Isle of Skye's Inaccessible Pinnacle, filmed with GoPro. He has been nominated for Action Sportsperson of the Year at the Laureus World Sports Awards and the National Geographic Adventurer of the Year Award.

"MacAskill, quite literally, has the world at his feet." —Telegraph

"The best exponent of his art in the world today." —Times