The Color of Welfare: How Racism Undermined the War on Poverty (Paperback) 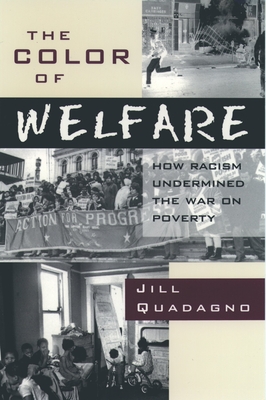 By Jill Quadagno
Email or call for price.
Usually Ships in 1-5 Days

Thirty years after Lyndon Johnson declared a War on Poverty, the United States still lags behind most Western democracies in national welfare systems, lacking such basic programs as national health insurance and child care support. Some critics have explained the failure of social programs by citing our tradition of individual freedom and libertarian values, while others point to weaknesses within the working class. In The Color of Welfare, Jill Quadagno takes exception to these claims, placing race at the center of the "American Dilemma," as Swedish economist Gunnar Myrdal did half a century ago. The "American creed" of liberty, justice, and equality clashed with a history of active racial discrimination, says Quadagno. It is racism that has undermined the War on Poverty, and America must come to terms with this history if there is to be any hope of addressing welfare reform today.
From Reconstruction to Lyndon Johnson and beyond, Quadagno reveals how American social policy has continually foundered on issues of race. Drawing on extensive primary research, Quadagno shows, for instance, how Roosevelt, in need of support from southern congressmen, excluded African Americans from the core programs of the Social Security Act. Turning to Lyndon Johnson's "unconditional war on poverty," she contends that though anti-poverty programs for job training, community action, health care, housing, and education have accomplished much, they have not been fully realized because they became inextricably intertwined with the civil rights movement of the 1960s, which triggered a white backlash. Job training programs, for instance, became affirmative action programs, programs to improve housing became programs to integrate housing, programs that began as community action to upgrade the quality of life in the cities were taken over by local civil rights groups. This shift of emphasis eventually alienated white, working-class Americans, who had some of the same needs--for health care, subsidized housing, and job training opportunities--but who got very little from these programs. At the same time, affirmative action clashed openly with organized labor, and equal housing raised protests from the white suburban middle-class, who didn't want their neighborhoods integrated. Quadagno shows that Nixon, who initially supported many of Johnson's programs, eventually caught on that the white middle class was disenchanted. He realized that his grand plan for welfare reform, the Family Assistance Plan, threatened to undermine wages in the South and alienate the Republican party's new constituency--white, southern Democrats--and therefore dropped it.
In the 1960s, the United States embarked on a journey to resolve the "American dilemma." Yet instead of finally instituting full democratic rights for all its citizens, the policies enacted in that turbulent decade failed dismally. The Color of Welfare reveals the root cause of this failure--the inability to address racial inequality.

Jill Quadagno is Professor of Sociology and Mildred and Claude Pepper Chair in Social Gerontology at Florida State University. She is the author of The Transformation of Old Age Security.