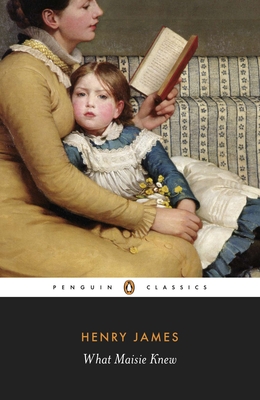 By Henry James, Christopher Ricks (Introduction by)
$13.65
Email or call for price.

A new edition of the innovative, emotionally complex novel.

After her parents’ bitter divorce, young Maisie Farange finds herself shuttled between her selfish mother and vain father, who value her only as a means for provoking each other. Maisie—solitary, observant, and wise beyond her years—is drawn into an increasingly entangled adult world of intrigue and sexual betrayal until she is finally compelled to choose her own future. Published in 1897 as Henry James was experimenting with narrative technique and fascinated by the idea of the child’s-eye view, What Maisie Knew is a subtle yet devastating portrayal of an innocent adrift in a corrupt society.

For more than seventy years, Penguin has been the leading publisher of classic literature in the English-speaking world. With more than 1,700 titles, Penguin Classics represents a global bookshelf of the best works throughout history and across genres and disciplines. Readers trust the series to provide authoritative texts enhanced by introductions and notes by distinguished scholars and contemporary authors, as well as up-to-date translations by award-winning translators.

HENRY JAMES (1843–1916), born in New York City, was the son of noted religious philosopher Henry James, Sr., and brother of eminent psychologist and philosopher William James. He spent his early life in America and studied in Geneva, London and Paris during his adolescence to gain the worldly experience so prized by his father. He lived in Newport, went briefly to Harvard Law School, and in 1864 began to contribute both criticism and tales to magazines.

During his career he also wrote many works of criticism and travel. Although old and ailing, he threw himself into war work in 1914, and in 1915, a few months before his death, he became a British subject. In 1916 King George V conferred the Order of Merit on him. He died in London in February 1916.

CHRISTOPHER RICKS is professor of humanities at Boston University and most recently author of Dylan’s Visions of Sin.

“Reading Henry James is like putting a new faculty to the test. This is the true morality.”—Anita Brookner