If I Die Tonight: A Novel (Paperback) 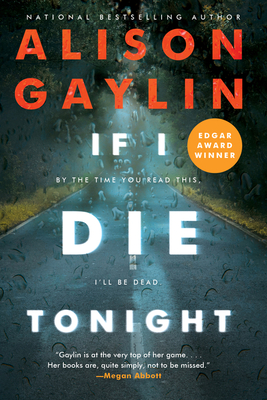 Winner of the Edgar Award for Best Paperback Original

Reminiscent of the bestsellers of Laura Lippman and Harlan Coben—with a dose of Big Little Lies or Stranger Things—an absorbing, addictive tale of psychological suspense from the author of the highly acclaimed and Edgar Award-nominated What Remains of Me and the USA Today bestselling and Shamus Award-winning Brenna Spector series, in which a seemingly open-and-shut police case with a clear-cut hero and villain turns out to be anything but simple.

Late one night in the quiet Hudson Valley town of Havenkill, a distraught woman stumbles into the police station—and lives are changed forever.

Aimee En, once a darling of the ’80s pop music scene, claims that a teenage boy stole her car, then ran over another young man who'd rushed to help.

As Liam Miller’s life hangs in the balance, the events of that fateful night begin to come into focus. But is everything as it seems?

The case quickly consumes social media, transforming Liam, a local high school football star, into a folk hero, and the suspect, a high school outcast named Wade Reed, into a depraved would-be killer. But is Wade really guilty? And if he isn't, why won't he talk?

Told from a kaleidoscope of viewpoints—Wade's mother Jackie, his younger brother Connor, Aimee En and Pearl Maze, a young police officer with a tragic past, If I Die Tonight is a story of family ties and dark secrets—and the lengths we'll go to protect ourselves.

Alison Gaylin is the author of the Edgar-nominated thriller Hide Your Eyes and its sequel You Kill Me, the stand-alone Edgar-nominated What Remains of Me, and the Brenna Spector series: And She Was (winner of the Shamus Award), Into the Dark, and the Edgar-nominated Stay With Me. A graduate of Northwestern University and Columbia University’s Graduate School of Journalism, she lives with her husband and daughter in Woodstock, New York.

“Right now, Alison Gaylin is at the very top of her game, crafting exhilarating and audacious crime novels that are both rich in character and rivetingly told. Her books are, quite simply, not to be missed.” — Megan Abbott

“This is mind-blowing suspense from an exceptional writer.” — Alex Marwood

“Alison Gaylin keeps astonishing me. The only thing I know for certain when I pick up one of her books is that I’ll love it. If I Die Tonight continues her winning streak with its timely, twisty and utterly human take on the way we live (and die) today. One of the best crime novelists, bar none.” — Laura Lippman

“Superb…Each plot point weaves perfectly for a poignant story strengthened by its attention to characters…If I Die Tonight never falters in its excellent illustration of people on the edge, and it joins the ranks of those mysteries that will prove to be one of the best published in 2018.” — Associated Press

“The action never stops, and sometimes the darkness feels as if it’s creeping into your own home.” — Suspense Magazine

“The perfect thriller for a weekend spent indoors, If I Die Tonight will challenge your own belief in your intuition.” — Bustle

“Gaylin’s skill at character development is in the spotlight, featuring a diverse cast of characters whose actions ring true — whether they are adults behaving badly or teenagers experiencing the perils of growing up in the social media age…you won’t be able to turn away from this page turner.” — RT Book Reviews (top pick)

“Excellently executed suspense that will leave you thinking past the final page.” — Book Riot

“Riveting… The story is masterfully told in different voices from a well-developed cast of characters. Fans of Megan Abbott and Wendi Corsi Staub will relish this one.” — Booklist

“The novel’s lasting impact comes from its indelible portrait of people in crisis.” — Publishers Weekly

“Alison Gaylin’s skillful balance of tension and intimacy will appeal to fans of psychological and domestic suspense, and the questions she raises about parents, children, and bullying have rich potential for book clubs.” — Library Journal