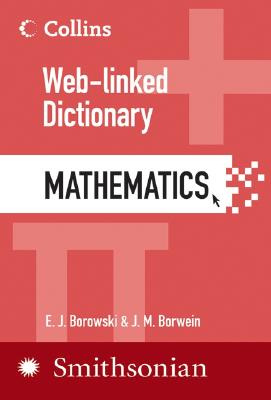 This completely revised and updated edition is designed for anyone who needs to understand the basic terms of mathematics.

E.J. Borowski is a Senior Lecturer in logic at Glasgow University.

A native of St Andrews in Fife, Jonathan Borwein was educated there and in London, Ontario, before graduating in mathematics from the University of Western Ontario in 1971. The recipient of an Ontario Rhodes Scholarship, he completed a DPhil in optimization theory in 1974 at Jesus College, Oxford. Since then he has taught at Carnegie-Mellon, Daihousie, and Waterloo Universities. From 1993 to 2003 he was Shrum Professor of Science at Simon Fraser University, and was the founding Director of the Centre for Experimental and Constructive Mathematics. In 2004 he rejoined the Faculty of Computer Science at Dalhousie as a Canada Research Chair in Distributed and Collaborative Research. A respected researcher and expositor, his research interests encompass optimization theory, functional analysis and computational mathematics. He has published extensively in these and other areas of pure and applied mathematics and has co-authored eight books including a graduate-level text Pi and the AGM (1986), A Dictionary of Real Numbers (1991), Pi - a Sourcebook (1997) and Convex Analysis and Nonlinear Optimization (2000). Dr Borwein is a Fellow of the Canadian Royal Society (1994) and of the American Association for the Advancement of Science (2002). He received an honorary Doctorate from Limoges in 1999. Other distinctions include the 1987 Coxeter-James Lecture of the Canadian Mathematical Society, the 1993 Chauvenet Prize of the Mathematical Association of America, and the presidency of the Canadian Mathematical Society (2000-2002). He is also a founder of a software house that produces The MathResource, an interactive version of this dictionary (www.mathresources.com) among other products.